skip to main | skip to sidebar

You can bury a lot of troubles digging in the dirt. 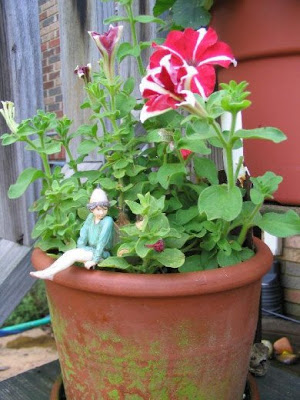 The rain finally stopped, and now it is hot and humid here. Pat was motivated by the I-work-for-rich-people pond man to finally finish it up himself. We went for more rock yesterday. He's building up the top for a biofilter. Then we'll finish rocking the waterfall. Hopefully, the added filter at top will help clear up the water. Then he's gonna fix the UV part. 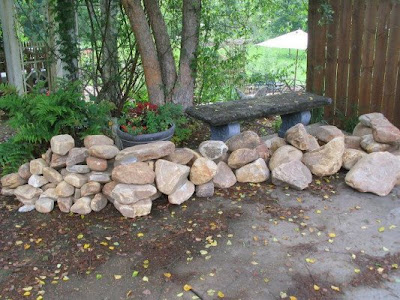 Over 2200 pounds of rock Pat (I helped load smaller ones until I smashed my finger!) loaded and unloaded yesterday.

We definitely have a frog! Still haven't seen him, but he talks to me when I'm sitting by the pond. I've named him Fred Mertz. I hope he'll get used to us around and maybe come out once in a while. I so want to get a look at him!

So for the planting update. I dug holes for two roses this morning, but the ground was so wet. I'm going to let it dry out some and maybe plant this evening. I did get Creeping Jenny planted between some rocks at pond edge. Also, on Pond Hill, I planted two 'Provence' lavenders and a wooly creeping thyme. I repotted two water lilies (one was just stuck in some rocks) and fed all the water lilies. I had to put my hands in pond water. Blech!

I Love The Moon